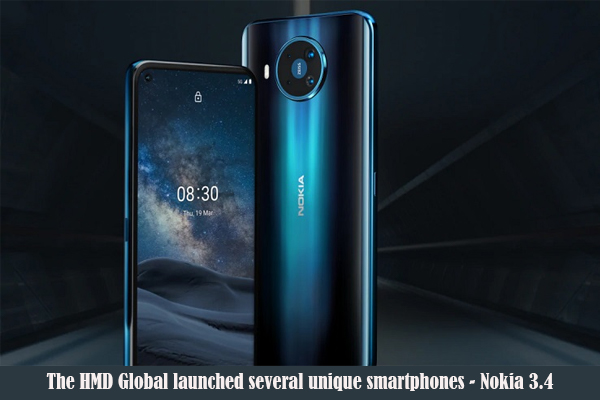 After launching Nokia 5.3 and Nokia C5 in India, HMD Global is now busy with its preparations of launching the next series of its smartphones – Nokia 3.4, Nokia 2.4 and Nokia 7.3. Expected to debut at IFA 2020 conference in Berlin next month.
Nokia 3.4 will most likely be a budget smartphone. With just a few days left for the official unveiling, also check out expected specifications of the new Nokia phone.

Expected Specifications Of The New Phone From HMD Global

In terms of specifications, the Nokia 3.4 “Dr Strange” will have a large 6.5-inch display with 19:9 aspect ratio and HD+ resolution. The punch hole selfie camera is one proof of that. And the back panel houses a circular camera module with as many as three camera sensors and one LED flash. Nokia 3.4 should house a triple rear camera setup comprising a 13MP primary sensor, a 2MP depth camera, and a 5MP ultra-wide-angle lens with LED flash. The panel also features a dedicated fingerprint sensor.

For performance, Nokia 3.4 should draw power from a Snapdragon 460 processor, paired with 3GB of RAM and 32GB/64GB of storage. The smartphone will run on Android 10. It will have a 4,000mAh battery coupled with 10W standard-charging. Interestingly, it will have a micro-USB port. It will also house a 3.5mm headphone jack.

In addition, the render has a few things off. For instance, volume keys are not aligned properly. Clearly, there is something cool happening with the buttons, the method they are drawn. We can safely predict that the Nokia 3.4 will have a dedicated Google Assistant launcher. It just like some of the recent Nokia phones.

Based on leaks and rumours so far, Nokia 3.4 is likely to be a budget smartphone. Above all, if launched in India, it will compete with Realme 6 and Redmi Note 9 and other popular under ₹15,000 phones.