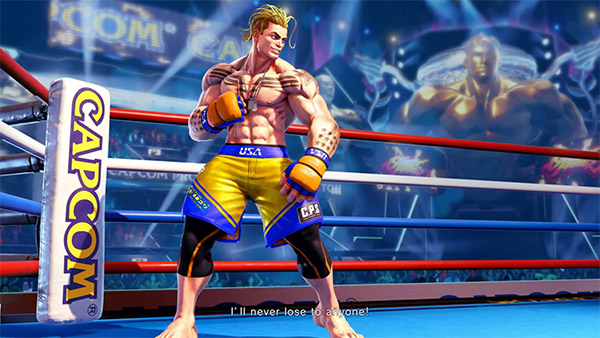 Capcom revealed a new character to the Street Fighter universe during today’s Street Fighter V presentation. Luke will be the much-ballyhooed final fighter added to the five-year-old game.
Apart from a vague November release date, very few details were shared about Luke. It seems like Luke has a role to play in upcoming games. Street Fighter V director said that he provides “a glimpse into the future” of the Street Fighter franchise. But what that means remains a mystery until Capcom is ready to spill the beans.

Street Fighter V first launched in 2016 with a modest roster including series mainstays like Ryu, Chun-Li, Cammy, and Dhalsim; as well as surprise picks like Birdie, Nash, and R. Mika, all of whom hadn’t been playable since the Street Fighter Alpha days. It also featured some really neat newcomers, including F.A.N.G, a duplicitous, poison-wielding disciple of M. Bison; and Rashid, a high-flying Arab socialite who augments his combat abilities with a variety of high-tech gadgets.

Additional fighters, both returning and new to the series, were added post-release. Some notable inclusions were Abigail, a gigantic gang member who first debuted in the Final Fight beat-em-up franchise; and Menat, an acrobatic psychic apprentice with a deadly crystal ball. And before today’s reveal, Street Fighter V’s final season has seen infinite-wielding Dan Hibiki and fortune-teller Rose join the game; with Street Fighter III hermit Oro and Rival Schools guest Akira Kazama still waiting in the wings for their simultaneous August 16 release.

StreetFighter V has received considerable improvements both in terms of gameplay adjustments and online stability since its rough launch What started as an absolute disappointment compared to the series’ historical highs has since become another competent entry in the legendary franchise. In addition, Capcom’s focus on producing high-quality, lucrative tournaments across the world has allowed fans to turn from simple players into professional competitors; even if the spirit of the competition is much different than what’s seen at community-run, grassroots tournaments.
The StreetFighter V saga is inching closer to its conclusion with Luke’s reveal. I can’t tell what’s in store for the series. But with a new group of developers now leading the project after former Capcom executive Yoshinori Ono’s departure last year. It won’t be surprising if they take StreetFighter in an entirely new direction.