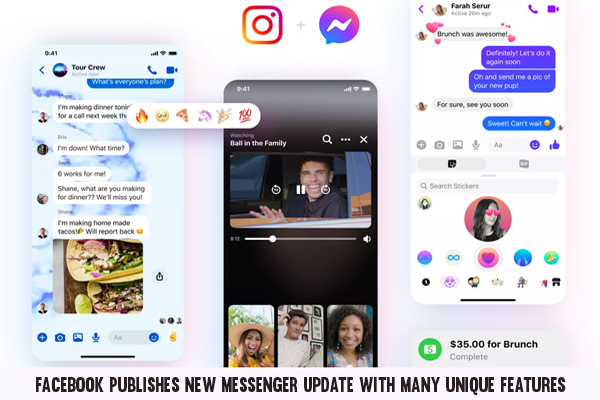 Facebook officially released a new logo and a Messenger update. Most of these features integrated with Instagram Direct and Messenger connection.

This new Messenger update has many features which no messaging application will have. Some of the new features include customizable emoji response bar, collaborative video viewing, rooms for combined video chat, colour gradients in the theme and personalized stickers. These features are all available in Messengers new update.

The most important part of this new update is the unique Messenger logo. It is two colored and represents the future of messaging and a fun place for the users. It also tells people that you are close to people who live far away from you. For the past few years, the Messenger logo was only blue. This new update upgraded the logo as well and made it as per the taste of people.

Messenger Update Makes It Unique From Other Messaging Apps

The new update also includes updated chat themes like tie-dye and love. The users can also customize the theme as per their taste. A Facebook spokesperson said that around 10 million people customize their themes every day and set it as per choice. Facebook made this easier for the users to change the themes with this new update.

This is not it, many new features like selfie stickers and vanish modes are also launching soon to make Messenger a fun app for the users. All together all these new features of messenger have blessed the users during the pandemic. These features are enough for the users. This new update is the moment to reflect instead of a shift as all the updates are benefiting the users.