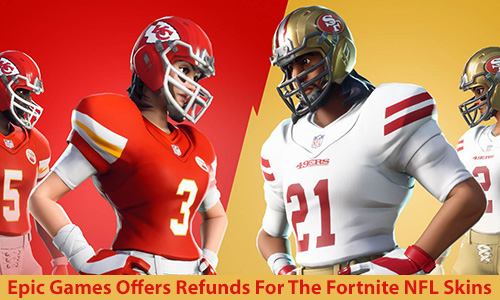 Back in July, we saw a monumental name change in the world of EA’s Madden NFL 21. The National Football League team from Washington announced the decision to change its name to something not considered to be a racist slur. They eventually settled on the relatively safe Washington Football Team. This real-life change has since spawned some ramifications in the gaming world. Outside of the aforementioned Madden NFL 21, it would seem that Epic Games will take a similar stance in Fortnite. Subsequently, the Fortnite NFL skins have been revamped.

According to Fortnite Intel, the Fortnite NFL skins previously made available in 2018 have removed the offensive name and logo. The eight skins consisting of Rush, Juke, Interceptor, Blitz, Strong Guard, Spike, Gridiron, and End Zone still retain the colors of the Washington Football Team though.

Voting with your wallet 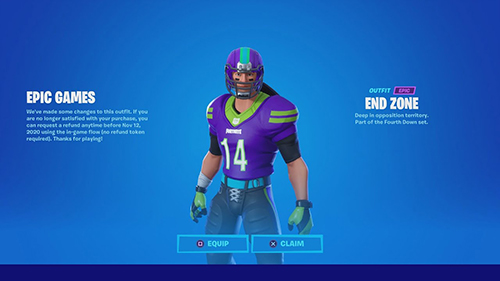 In lieu of the change, Epic Games is allowing players to get a refund for a limited time. Best of all, you can do so without the use of a refund token. Entering the game will see an in-game message informing players of the initiative. You will be able to refund any Fortnite NFL skins, until the deadline of November 13. With players only getting three refund tokens, this move will enable players to make an easier decision. Normally, the tokens can be used to claim refunds on any eligible items within 30 days of purchase with no questions asked.

To obtain a refund, simply head to your profile page in the settings. Select Lifetime Return Requests, and you should be able to see the Fortnite NFL skins as an option. If the option is unavailable, it could be due to the fact you’ve already used all of your refund tokens. You may need to play a game or enter and leave Creative mode to get the option to display properly. The refund will net you 1500 V-Bucks, which can then be used for other purchases such as Halloween skins.

One thought on “Fortnite NFL: Epic Games Offers Refunds for the NFL Skins”